Yes, the law was passed in 1992 for NYC to allow women to go topless (like Men).
But, dievca thinks the conversation started in the mid-1960’s with the~ 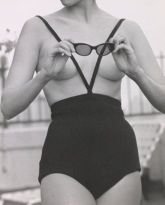 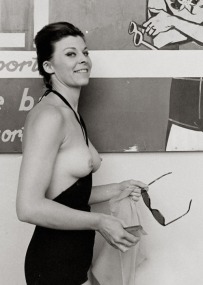 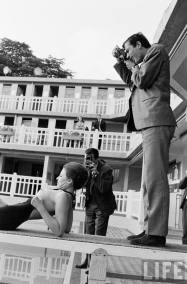 Who’s idea was it?

An influential designer in the 1960s-70s from America; he was most known for his sport clothes and radical styles including the topless swimsuit, see-through blouses, and “no-bra” bras.

Swimsuit as a statement:
Gernreich purposefully used his designs to advance his socio-political views. He wanted to reduce the stigma of a naked body, to “cure our society of its sex hang up”, as he put it. Gerreich stated, “To me, the only respect you can give to a woman is to make her a human being. A totally emancipated woman who is totally free.”

Gernreich said, “Baring the breasts seemed logical in a period of freer attitudes, freer minds, the emancipation of women.” Gernreich told Time magazine in 1969, the monokini “is a natural development growing out of all the loosening up, the re-evaluation of values that’s going on. There is now an honesty hangup, and part of this is not hiding the body—it stands for freedom.”

“Every girl I knew was offended by the dirty-little-boy attitude of the American male toward the American bosom. I was aware that the great masses of the world would find the topless shocking and immoral. I couldn’t help feel the implicit hypocrisy that made something in one culture immoral and in another perfectly acceptable.”

In January, 1965, he told Gloria Steinem in an interview that despite the criticism he’d do it again.

“A designer stands or falls on the totality of each year’s collection, not just one item. At the moment, this topless business has done nothing but take away from my work, but in the end, I’m sure having my name known internationally will be a help. But that isn’t why I’d do it again. I’d do it again because I think the topless, by overstating and exaggerating a new freedom of the body, will make the moderate, right degree of freedom more acceptable.”

Nowadays — the Monokini has a top and bottom connected in some format covering the breasts. The swimsuit Rudy Gernreich designed would be called a unikini.

Thank you to LIFE Magazine, Messy Nessy Chic, and Wikipedia.