We all have friends who always have something bad happen to them.  Over and over. 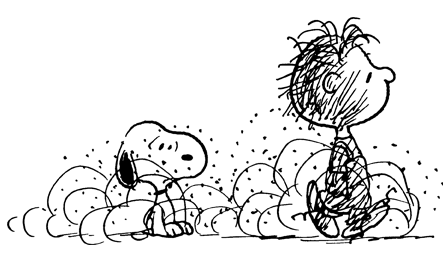 They are like Pig Pen in the Peanuts Comic Strip – a black cloud follows them, wherever they go.

Why does this happen to some people?
They are good people, they work hard, they try to do what is right.
Why do they get more bad breaks in Life?

Maybe they do, maybe they don’t.
Everyone gets a bad break, now and then.
Life is known to throw you a bad turn or two — but for most people, not one after another.
And not for almost every major decision.

What is going on?

Even though this friend plays by the rules, she avoids things that are uncomfortable and doesn’t show emotion. she holds everything in and doesn’t think through her World fully. She is highly intelligent and assumes her Cognitive Intelligence is enough to give her the correct answers.  This creates a bubble that doesn’t allow her to view all the information about people or situations. Her view is not very large, nor flexible and of low emotional intelligence. Add desperation to reach ideals that she has wanted in her mind: Men, Babies, Family, Work Goals, Owning Property, Marriage, etc. The results don’t always go as planned….on almost everything.

Hence, the black cloud of constant surprise and drama.

She doesn’t handle things in a timely, direct and informed way.

The friend isn’t aware that avoiding conflict just creates a larger issues later. She is completely surprised when her cognitive intelligence didn’t tell her true. She doesn’t realize that a decision made without forethought might bite you in the behind. That being emotionally savvy could give her more insight to how relationships (personal and business) might function. The act (or non-act) of not sharing information and being so private, limits your information flow and can cause bad decisions. Cold logic doesn’t always work.

dievca does love and appreciate this friend, but the poor decisions and drama get old.  Same crap, different situation, different day.

The good news? Though dievca’s friend is older, she has latched on to a man who is into saving people. He likes to be the Knight in White Shining Armor and solve everyone’s problems (maybe to avoid his own? …no matter). Maybe this gentleman can help her make better decisions. dievca just hopes it doesn’t get old for him. she doesn’t want to see the friend back on her doorstop any time soon. Too much drama.

14 Comments on “Bad Choices vs. Bad Breaks – be honest”