Bryers told the Arizona Daily Star in 2010: ‘I got the idea for a plumpy gal pin-up and thought I’d like to make it into a calendar series. But how was I going to sell a plump girl?’

He then brought the series to the U.S.’s top calendar maker at the time, Brown & Bigelow, who ‘reluctantly put it in the line and figured it would last a short time.’

Hilda lived in the 1950s to 1980s and reached the peak of her fame in the 1960s. During that time, she was one of the best-loved calendar pin-up girls, alongside the likes of Marilyn Monroe. From lounging in long underwear and teddies to biking and sailing adventures in bikinis, Hilda embodies a spirit of innocence, playfulness and effortless charm.

In past reality, Hilda may have been less prominent because of her curvaceous figure,  but thanks to the internet she is making a comeback.
dievca appreciates the glory of a Zaftig Pin-Up.
There is hope for dievca, yet! XO 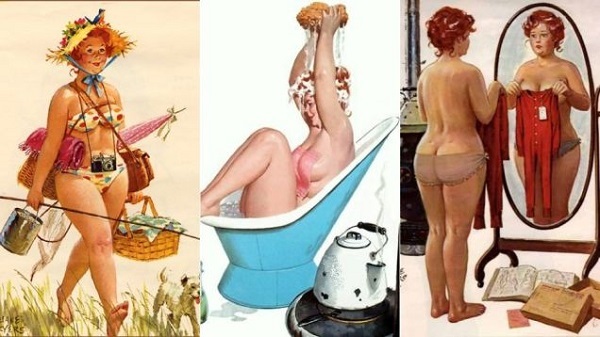 Thanks to RebelsMarket and the DailyMail