← Serving it Fresh
Beachtail – for the bikini? →

dievca was cutting a pineapple to share with Master and the idea for becoming a Pineapple Princess and pulling from Tiki Culture flashed through her head.

THE HISTORY
The advent of Tikidom can be traced back to a man named “Don the Beachcomber”, aka “Donn Beach”, aka “Donn Beach-Comber”… or, less interestingly, Ernest Raymond Beaumont Gantt. Gantt was a Texan born in 1907, but he knew there was a whole world outside the steak-scented borders of the Lone Star State, so he traveled to the rum-scented Caribbean and South Pacific and learned a lot about how to chill on the way.

When Don returned to the States, he wanted to emulate the laid-back times he experienced in the tropics, so he opened the world’s first Tiki bar, Don the Beachcomber, in Los Angeles in 1934. People — including celebrities — flocked to the bar for its escapist ambiance, potent-but-tasty rum cocktails, and exotic cuisine (which was actually slightly modified Cantonese food, but still — not very typical for the times).

Also in 1934, “Trader” Vic Bergeron opened a similar bar in Oakland (originally called Hinky Dinks, but changed to Trader Vic’s in 1937) that also drew crowds for its Polynesian-themed drinks and food. Because of its success, Vic was able to open more locations in places like Seattle and Hawaii (before statehood!). A fad was developing.

FORBIDDEN ISLAND
During World War II, Gantt was deployed, so his wife took over management of the bar and expanded it into a chain with 16 locations. Tiki culture — inspired by the art, style, and attitudes of Polynesia — became huge in America during the 1940s and ‘50s, and fueled the two chains’ success even more, because people wanted to experience a time away from work and stress.

Tiki bars fell out of the public eye for a while between the ‘60s and ‘90s, but experienced a resurgence thanks to a few dedicated Tiki acolytes, who started up bars based on the original Don the Beachcomber and Trader Vic’s.

Your typical Tiki cocktail is a mix of light or dark rum, flavored syrups, and tropical fruit juices — which is essentially the recipe for the Mai Tai (rum, orange Curacao, syrup, lime juice), the first Tiki drink to have widespread popularity after it was (allegedly) invented by Trader Vic in 1944. 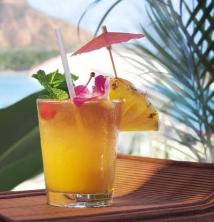 Add all the ingredients to a cocktail shaker except the mint and pineapple. Shake and strain into a high ball glass filled with ice. Garnish with the fresh mint and pineapple, you can float some extra dark rum on top.

CUTE LITTLE UMBRELLAS
Rumor has it that the umbrellas were originally developed as a way of keeping the ice in a drink cold on a warm day out on the beach. They were popularized by Trader Vic in the 1930s, and caught on from there.

You could go with a range of clothing for your Sir or Madam, from grass skirts, no top with leis or more 1950’s Household Kink with a retro dress or Hawaiian shirt in a kitschy pattern. dievca was hooked on being a Pineapple Princess when she ran into these dresses from Loco Lindo: 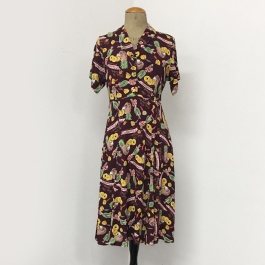 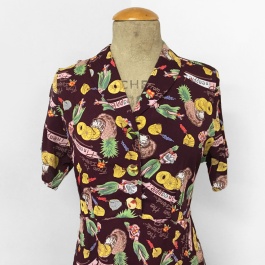 Can you imagine serving your Sir or Madame a Mai Tai on their arrival home and kneeling to offer them fresh pineapple from the husk. Perhaps a little 1950’s/1960’s beach music in the background. And an interesting tie bikini or swimsuit trunks under your kitschy 1950’s Print dress/top. Could be a lot of innocent, or a little more, risqué Fun!

Just because…
dievca would like to offer some sweet and innocent items she ran into while researching being a Pineapple Princess and Tiki Culture — who knows maybe the onesies would be of use after creating an excellent Cosplay moment + 9 months. XO 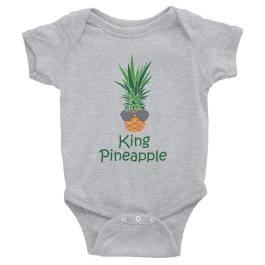 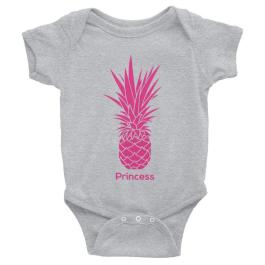