2013 was the beginning of Neoprene appearing in fashion, used by designers such as Gareth Pugh, Balenciaga, Rick Owens, Lanvin and Vera Wang.

It is stiff and very warm to wear. But the mainstream 2014 offerings were fun! 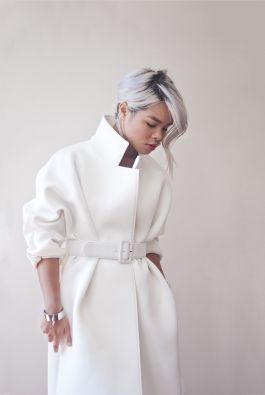 Neoprene was invented by DuPont scientists on April 17, 1930 after Dr Elmer K. Bolton of DuPont attended a lecture by FatherJulius Arthur Nieuwland, a professor of chemistry at the University of Notre Dame. Nieuwland’s research was focused on acetylene chemistry and during the course of his work he produced divinyl acetylene, a jelly that firms into an elastic compound similar to rubber when passed over sulfur dichloride. After DuPont purchased the patent rights from the university, Wallace Carothers of DuPont took over commercial development of Nieuwland’s discovery in collaboration with Nieuwland himself. Arnold Collins at DuPont focused on monovinyl acetylene and allowed it to react with hydrogen chloride gas, manufacturing chloroprene.

DuPont first marketed the compound in 1931 under the trade name DuPrene, but its commercial possibilities were limited by the original manufacturing process, which left the product with a foul odor. A new process was developed, which eliminated the odor-causing byproducts and halved production costs, and the company began selling the material to manufacturers of finished end-products. To prevent shoddy manufacturers from harming the product’s reputation, the trademark DuPrene was restricted to apply only to the material sold by DuPont. Since the company itself did not manufacture any DuPrene-containing end products, the trademark was dropped in 1937 and replaced with a generic name, neoprene, in an attempt “to signify that the material is an ingredient, not a finished consumer product”. DuPont then worked extensively to generate demand for its product, implementing a marketing strategy that included publishing its own technical journal, which extensively publicized neoprene’s uses as well as advertising other companies’ neoprene-based products. By 1939, sales of neoprene were generating profits over $300,000 for the company (equivalent to $5,403,589 in 2018). ~ Wikipedia

Neoprene provides cushioning, insulation and is water-resistant. It is quite durable, as well.

And it’s being used as one of dievca’s favorite accessory designs – the backpack.

Check out the current offerings from Dagne Dover: 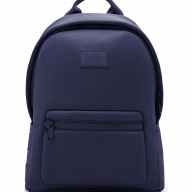 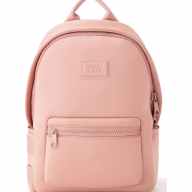 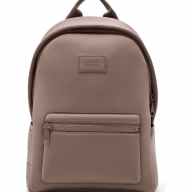 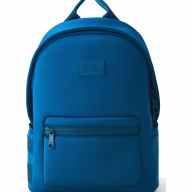