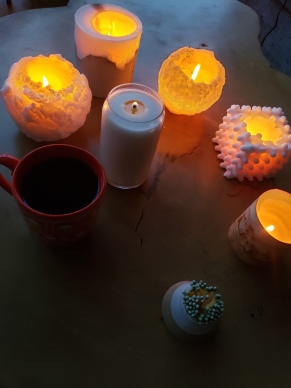 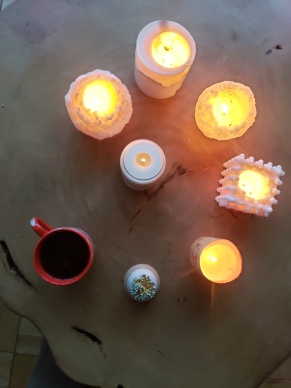 Because Earth doesn’t orbit upright but is instead tilted on its axis by 23 1/2 degrees, the Earth’s Northern and Southern Hemispheres trade places in receiving the sun’s light and warmth most directly. The tilt of the Earth – not our distance from the sun – is what causes winter and summer. At the December solstice, the Northern Hemisphere is leaning most away from the sun for the year.

Being the shortest day means the solstice is also the longest night of the year, and one of the original traditions was rooted in candlelight—both for the needed light, and to celebrate the return of the sun in the coming months.

To celebrate, use a tabletop and cover it in unlit candles either in a circle or a varied pattern. Place a candle that symbolizes the sun (ideally in yellow or gold) in the center and taller than the rest of the candles. Light the sun candle first, and then the rest of the candles. You can recite a ritual while doing it, too.
(Or just have your coffee at 5:02 am EST – sounds like a ritual to dievca!)