Cruising is distinguished from regular driving by the social and recreational nature of the activity, which is characterized by an impulsively random, often aimless course. A popular route (or “strip”) is often the focus of cruising. “Cruise nights” are evenings during which cars drive slowly.

dievca went to College in a mid-sized City and worked selling dance clothing and shoes her Junior/Senior year for extra cash.  The store was off the historical “Main Strip” where kids would cruise in their cars on Friday and Saturday nights.  She was amazed to see the activity continue in the mid-80’s, because she thought it was a 1960’s and a Southern thing.

The same feeling occurred, last night – watching a few of lowriders cruising in Albuquerque.  They joined the ranks of a couple of vintage cars and souped-up mufflers on pick-up trucks.  They ALL made dievca smile~ 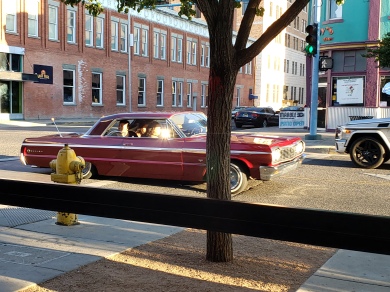 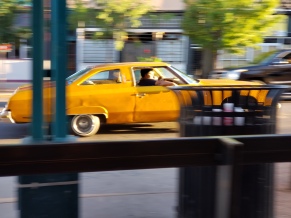 Apparently, New Mexico claims to be the Lowrider Capital of the World.
The town Espanola in particular:

Wedged between two national forests and split by the Rio Grande sits Española, New Mexico. With a population just over 10,000, and an economic relevance that peaked when the railroad rolled through in 1880, you wouldn’t expect much more than Southwestern small-town tourist fare here. All the more surprising, then, that it’s become the Lowrider Capital of the World.

It started small, 60 years ago. The lowrider scene had already taken root in Los Angeles, a new car culture born of rebellion. Its brash, flashy, low-and-slow mantra served as an act of defiance by Chicanos who had long been told to keep their heads down, work hard, and assimilate into the white American mainstream. Lowriders were an outward statement that they weren’t content to blend in. They had arrived, they had a culture all their own, and they wanted people to know it.

Showing off on the street is a surefire way to draw police attention, and lowriders were no exception. Hydraulic suspension, the defining feature of a modern lowrider, was invented in response to harassment from law enforcement. California authorities made it illegal for any part of a car’s bodywork to sit lower than the bottom of the wheel. With hydraulics, you could raise the car to dodge a ticket and slam it back down when the cops were gone.

That resonated in Española. The town, sometimes called “Little L.A.,” has deep ties to the Hispanic and Chicano communities of Southern California. Families that had been in New Mexico for generations would head west seeking opportunity and return with money and a taste of California culture. Lowriders were a natural fit for Española, a continuation of the artistic tendencies that had defined Northern New Mexico for hundreds of years.