dievca is heading to Master’s for Christmas Eve, as He just got back from Ireland – she knows He brought home some hooch…

Irish Coffee is a cocktail consisting of hot coffee, Irish whiskey (excellent), and sugar, stirred, and topped with cream. The coffee is drunk through the cream. The original Irish Coffee was created by an airport chef named Joe Sheridandievca, who worked at the little Foynes airport near Limerick, according to the Ireland Whiskey Trail. He whipped it up one rainy winter night for passengers whose plane got turned around due to a storm. He later moved to the Shannon Airport, and took the drink with him.

(Note: In 19th-century France, a mixture of coffee and spirits was called a gloria.) 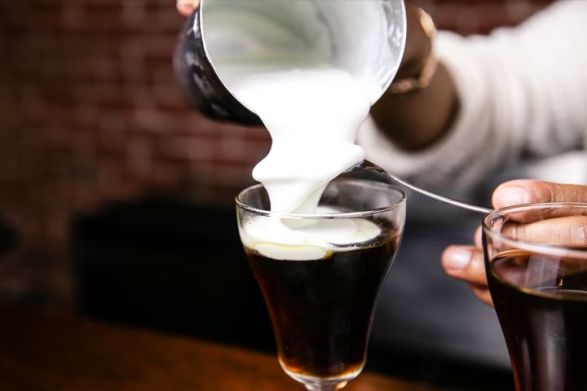 Main alcohol: Irish whiskey
Ingredients: 1 1/3 oz (2 parts) Irish whiskey, 1 oz (1½ parts) Fresh cream, 1 tsp. Brown sugar, 2 2/3 oz (4 parts) Hot coffee
Preparation: Heat the coffee, whiskey and sugar; do not boil. Pour into glass and top with cream by carefully pouring it over the back of a spoon initially held just above the surface of the coffee and gradually raised a little until the entire layer is floated.
Served: Hot
Drinkware: Irish coffee mug
Inventor: Joe Sheridan