Presentation in white with a dark ending: Marie McDonald

Marie was born in Kentucky, the daughter of a former Ziegfeld Girl and granddaughter of opera singer. At the age of 15, Marie became a Powers model and dropped out of school so she could enter beauty pageants, winning the title of “Miss Yonkers” and “The Queen of Coney Island” on the way to becoming “Miss New York” in 1939. Soon after, she moved to Hollywood and became a singer with Tommy Dorsey’s Orchestra, but could only land movie roles in the chorus line or small one-line parts.

Lacking the talent to really make it in Hollywood, she sought attention through scandal. 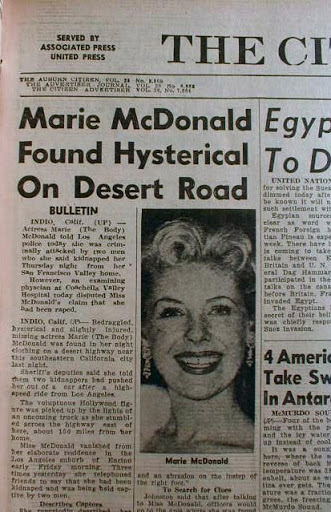 On top of 7 marriages, she had affairs with two of Elizabeth Taylor’s ex-husbands and even mobster Bugsy Siegel.  In 1957 she got national attention by claiming to have been kidnapped by two men.  Afterwards, her tabloid appearances were numerous, with car accidents, arrests, alcoholism, drug abuse, and ultimately committed to a psychiatric clinic.

After escaping from the clinic, and a wild string of abuse and excess. In 1965, McDonald was found dead at the age of 42 as a result of a drug overdose. Her widower followed.

dievca is now planning to stay away from white lingerie….