Shoes have, through history, revealed much about the wearer – from their social status to their sexual appetite…

Shoes have long been great indicators of your social standing and wealth. From the 13th century a new pair of shoes was only available to the wealthiest or highest ranking members of society: shoes were handmade by skilled craftsmen, using prohibitively expensive materials. As such it was inevitable that shoes were seen as a status symbol. 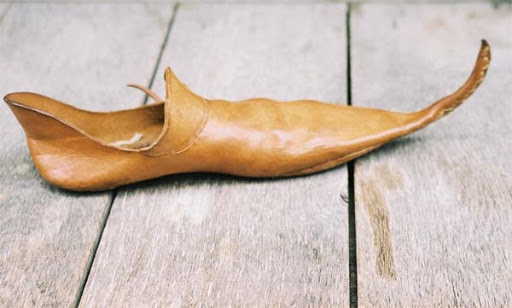 The medieval poulaine, for example – a long, pointed shoe worn by both men and women was a style taken to the extreme by gentlemen of wealth: a poulaine that posed a hindrance to walking, and made climbing stairs almost impossible, immediately indicated that the wearer was a man of independent means who didn’t need to work and therefore concern himself with sensible footwear.

The longer versions were also expensive and difficult to make, but many thought the style ridiculous and lewd, so sumptuary laws were passed capping toes to a mere 5cm (2 inches).

By 1500 the poulaine had all but disappeared, and was later replaced by the Tudor footbag. Characterized by its very wide toes, the shoe derived its name – and the alternative ‘cow’s mouth’ – due to its breadth. The girth of the shoe was again an indicator of status: note, for instance, the impressively wide shoes worn by Henry VIII.

Some shoes sported soles that reached a width of 17cm (6.5 inches), and again sumptuary laws were passed to curb this ‘excessive’ style.

The long pointed toe of the medieval poulaine was not only an indicator of status, but also of the wearer’s masculinity – and, by inference, his sexual proclivities. 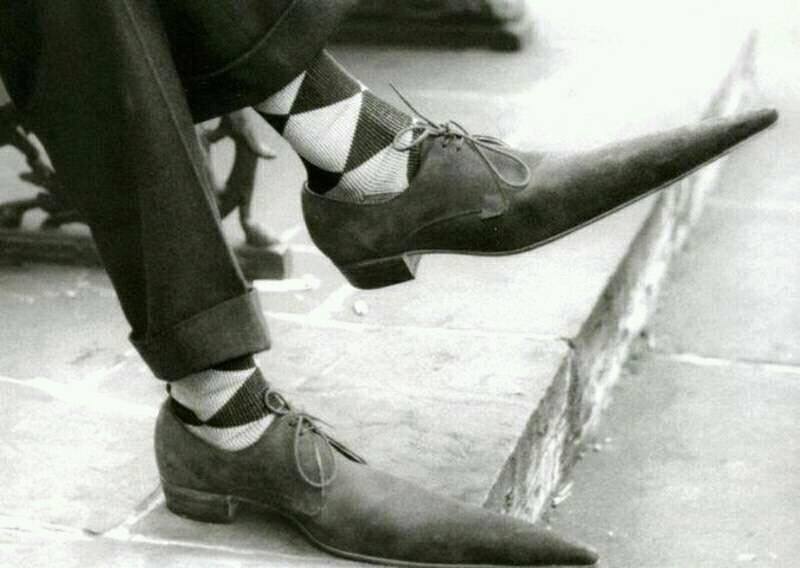 The pointed toe has resurfaced numerous times through history. It’s apparent in the form of the winklepicker in the 1950 and 1960s – a pointed toe found on men’s shoes and often on women’s stiletto heeled court shoes, whose name was derived from the sharp pin used for prying winkles from their shells – and in designer Vivienne Westwood’s ‘penis shoe’ Spring/Summer 1995. 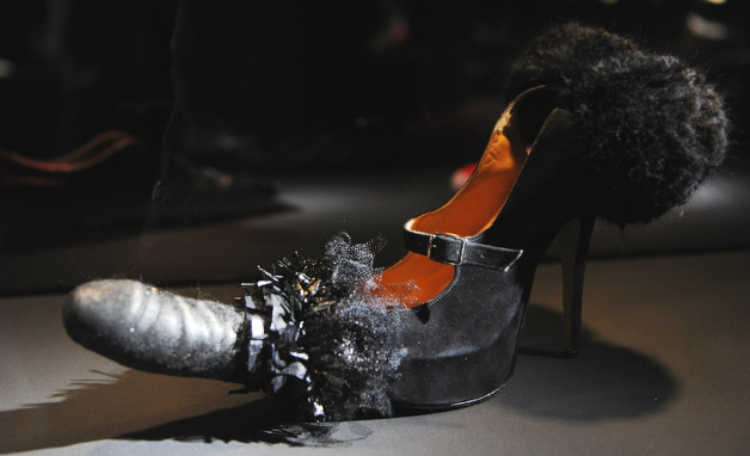 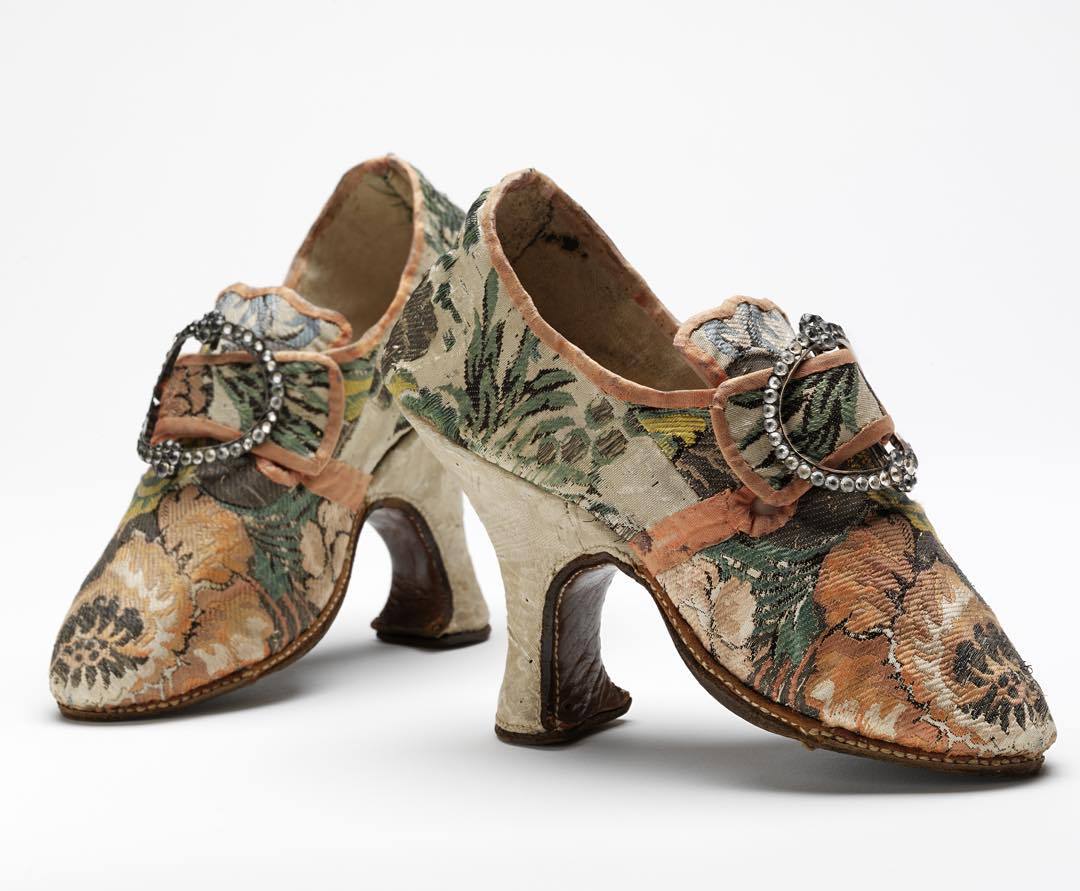 In the 18th century, French fashion dominated. One particularly popular style of shoe was the high, French, ‘Pompadour’ heel. Named after Madame Pompadour, mistress to King Louis XV, this heel was incredibly narrow-waisted, and curved inwards under the foot. They were notoriously difficult to walk in, but made the most fantastic boudoir shoe. An 18th-century satirical poem said of them: “Mount on French heels, when you go to the ball – Tis the fashion to totter, and show you can fall.”

By the 1890s, heels on women’s shoes reached heady heights with the very fashionable style known as the Cromwell. This was a high-heeled shoe with a tabbed front and buckle, called the Cromwell in the mistaken belief that buckles were worn on the shoes of Oliver Cromwell and his followers in the first half of the 17th century. In reality, at that time his followers were wearing practical low-heeled leather shoes fastened with a latchet tie. 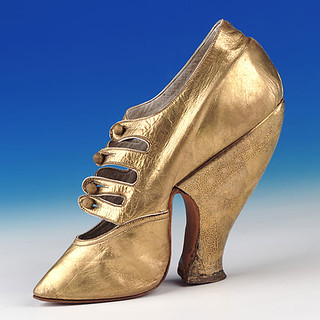 The extremely decadent Cromwell shoes could have heels up to 16 cm (6¼ inches). Such a high-heeled shoe caused consternation at the time. Wearers were ridiculed, and apparently cartoons of the day carried images of women needing sticks to walk, or helping hands either side of them.

Towards the end of the 1890s these exaggerated heeled shoes became very popular with women who entertained in the boudoir, thereby solving the problem of walking in them, but making them unwearable by ‘ordinary’ women.

White wedding slippers symbolize purity, and black is often worn for work or attendance at a funeral, but what about red?

Red has long been a significant and powerful color in part due to the expense involved in obtaining red dye. Red shoes were the prerogative of Roman senators and later, the emperor, and popes have worn red since the 13th century. Red-heeled shoes were also popular in the 17th century.

Red shoes also symbolize danger and passion, the very start of life, and the end. 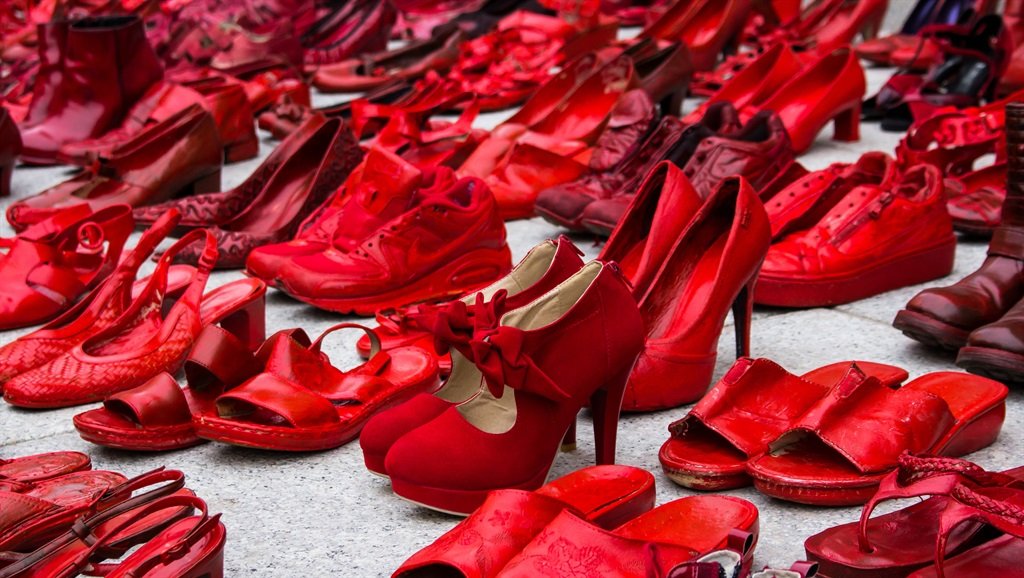 Recently, across the world red shoes have been used to symbolize and protest violence against women.

Shoes can express identity, and indicate the cultural group to which the wearer belongs. As far back as Ancient Rome, all people were duty bound to wear the correct footwear – whether non-citizen, citizen, senator, priest or soldier. This meant you could see where individuals were positioned in society simply by the footwear they wore. 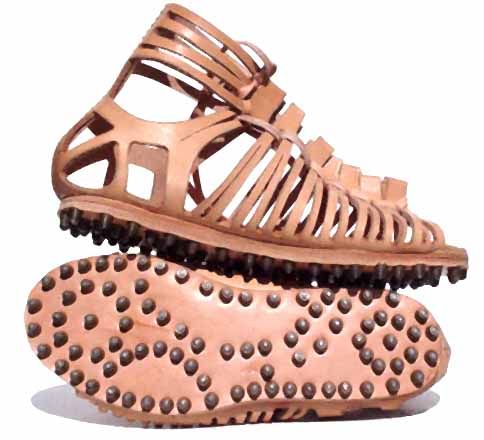 The Roman soldier wore a style with an open toe and an open lattice upper, known as the caliga. It was a practical style, strong and well-ventilated for endless marching.

The emperor and high-ranking officials, on the other hand, wore the campagus – an open-toed boot, laced at the front. 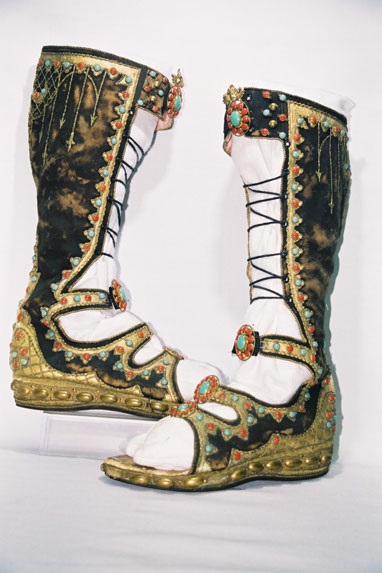 Red soles and heels equal power and identity – from the red heels of King Louis XIV, to the red soles of expensive Louboutin’s today. From the 1660s the flamboyant King Louis XIV of France became one of the most influential men in Europe, and was responsible for several fashion trends including the high red heel, either covered with red Morocco leather, or painted. 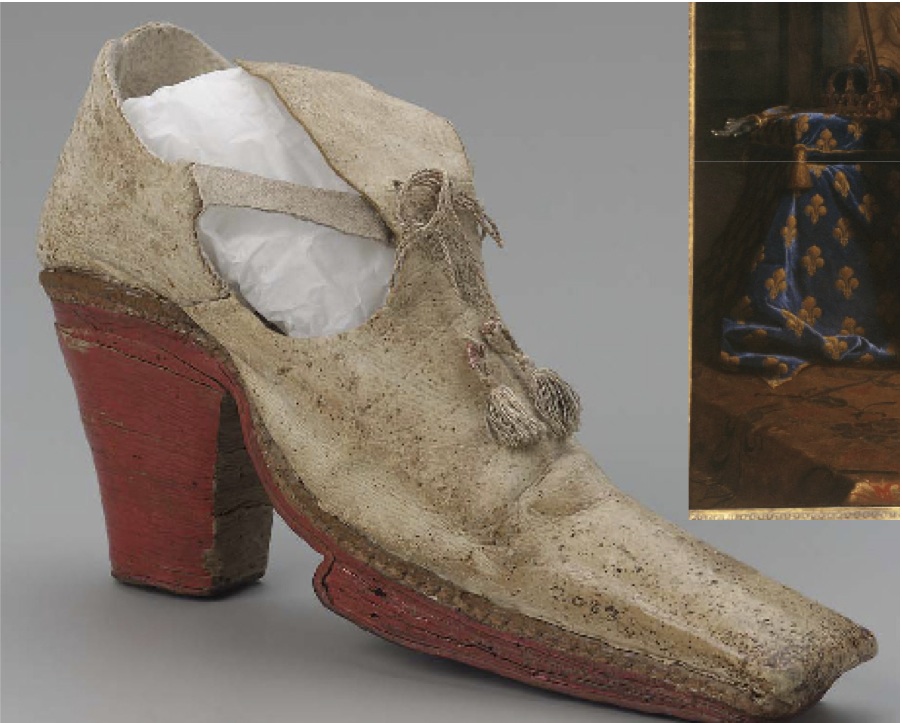 Red was a symbol of wealth, only worn by the King and his court. The high heel not only elevated the short Monarch above the masses, but also alerted onlookers to his high status. Gradually the red heel filtered down through the classes and became a sign of fashionable sophistication. 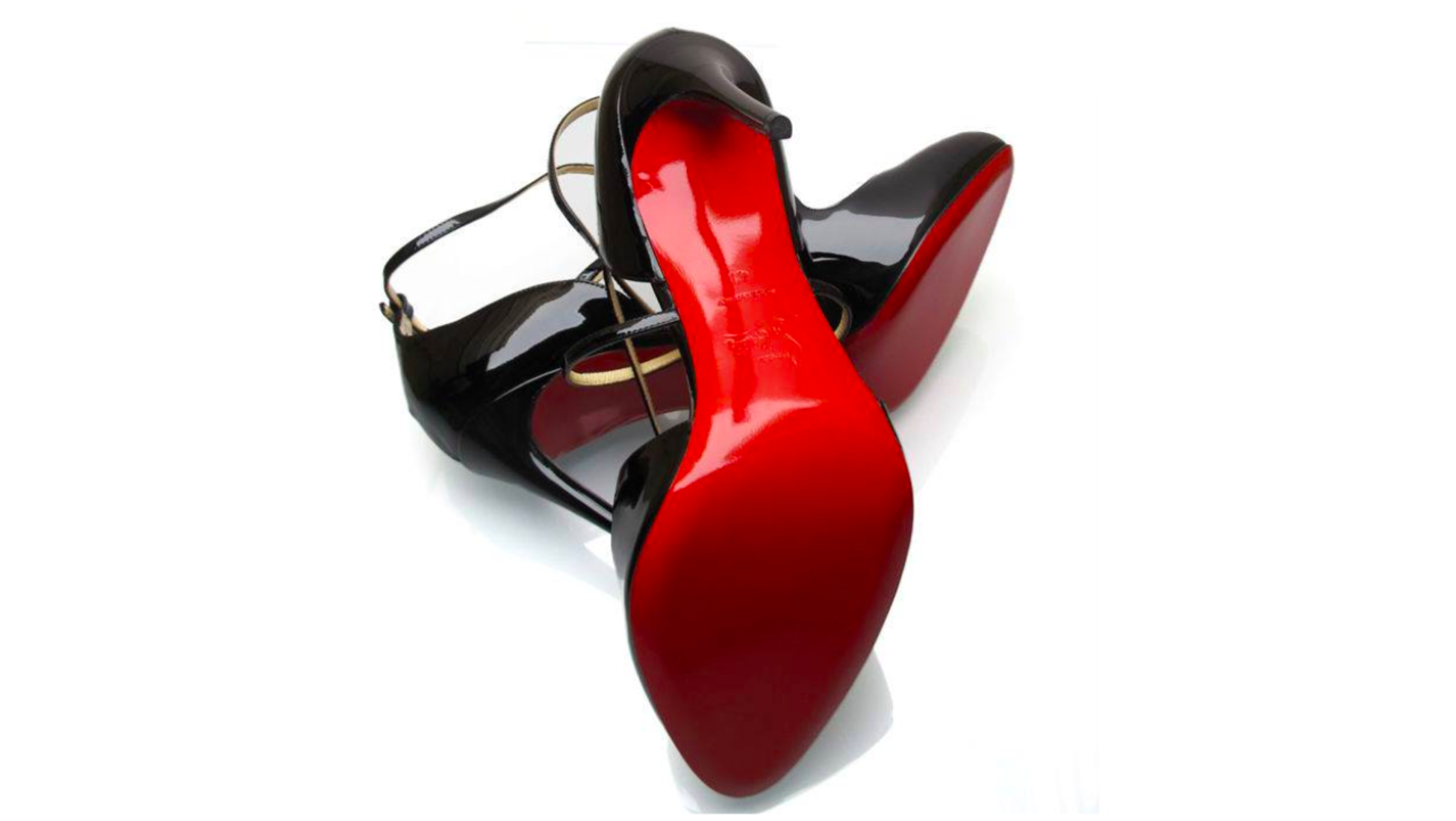 A “Thank You” to BBC History Extra and Rebecca Shawcross. She is the author of Shoes: An Illustrated History (Bloomsbury, 2014) 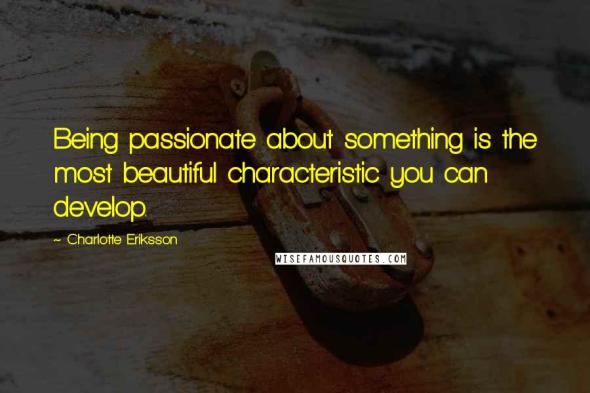 dievca went to a Bat mitzvah, last evening. It was the most formal presentation of a Young Adult she has experienced in the 16 years in the City. What she means is that the Rabbi was passionate, the celebrant was well tutored and it was a lovely service.

dievca is not Jewish and she doesn’t understand Hebrew – but, again, the Rabbi was so passionate and explained the service clearly, dievca paid attention and was engaged. 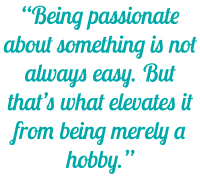 What it reinforced is that dievca ends up enjoying going on someone’s ride when they are passionate about their Life, Talents, Calling or Crafts.

What are you Passionate about?

Take dievca on your ride! 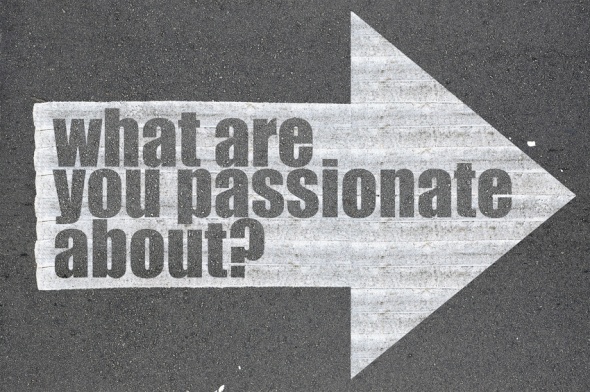