A risqué illustration featuring 64 Disney characters showed up in Paul Krassner’s satirical US publication, The Realist, 50 years ago.

Originally published out of the offices of Mad, The Realist lays serious claim to being the world’s first and longest surviving underground magazine, running from 1958 to 2001.

In 2007, Krassner recounted to The Guardian how he was inspired to commission the drawing by Disney’s death in 1966:
“I decided to visit Disneyland for the first time. I asked the head of security if there was any special ceremony to mark his death.

“‘No,’ he replied. ‘We kept the park open. We felt that Mr Disney would have wanted it that way.’ This was the moment I realised that, although Disney had served as the Intelligent Designer for a whole stable of imaginary characters – repressing their libidos in the process – they were now mourning for him in a state of suspended animation.

“When I got home, I called Wally Wood, a staff artist for Mad magazine, and assigned him to create a black-and-white montage for the middle two pages of the May 1967 issue.”< 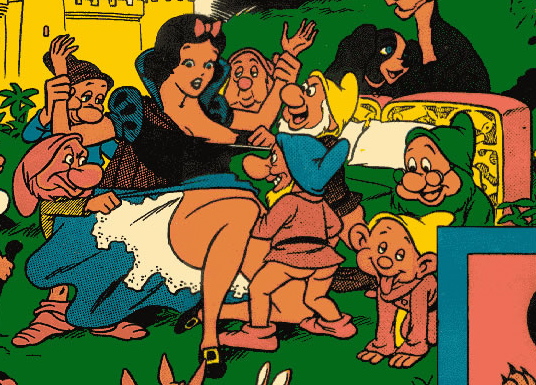 The artwork inspired irreverent t-shirts with Snow White and “the Sir Punks”, plus Minnie and Mickey going at it  selling at Seditionaries.  This was one of a number of graphics introduced into the historic store at 430 King’s Road early in 1978 by Malcolm McLaren and Vivienne Westwood.