dievca can imagine the OPTIONS for D/s Bondage and Restraint
or just waiting quietly to serve Master…chained.

Mucki
Sergio Rodrigues, 1958
One of the first pieces designed by Sergio Rodrigues, “the father of Brazilian modern design”, the versatile “Mucki” can double as bench or coffee table, in varying lengths, with fixed height.
The originals go for $8000 to $16,000 dollars. 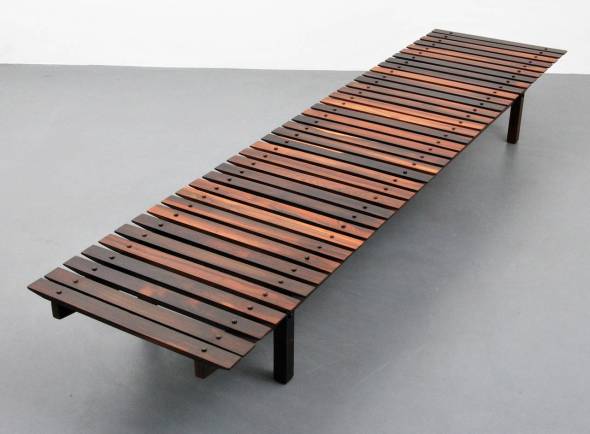 About Sergio Rodrigues
Sergio Rodrigues has been dubbed the father of Brazilian furniture. Indeed, he was responsible for establishing a new paradigm in design, setting himself apart with his very own language in his quest for a clearly recognizable Brazilian identity. He became notorious for his use of robust woods like jacaranda, peroba and imbue to create quintessential icons. His notorious “Mole” armchair was an immediate success, comprised of jacaranda and upholstered cushions supported by leather straps. The piece, informed by Rodrigues’ playfulness and wit, readily became associated with a typically relaxed Brazilian attitude and lifestyle. Rodrigues furniture lets the robust thickness of Brazilian wood speak for itself with his imaginative functional forms and playful volumes.

Sergio Rodrigues was born in Rio de Janeiro in 1927. The designer graduated from the Faculdade Nacional de Arquitetura in 1952, and shortly after founded one of the first stores of modern furniture and art in Curitiba. In 1955, Rodrigues opened the more established company Oca, which he referred to as ‘a laboratory for Brazilian furniture and handicrafts’ and became one of the most critical components in the evolution of furniture in Brazil. Rodrigues later set out on his own and has since been designing furniture, hotels, residences and notorious pre-fabricated dwellings.

Amongst his well-known works are pieces of furniture designed for the Brazilian Embassy in Rome, for the UNB (Brasília University) and the Teatro Nacional (National Theater in Brasília). The designer has worked closely with Oscar Niemeyer, as the latter’s interior designer of choice for his buildings in Brasilia. (from EPASSO.com)