They said “Toy Boys” – a Mixed Message from Suitsupply 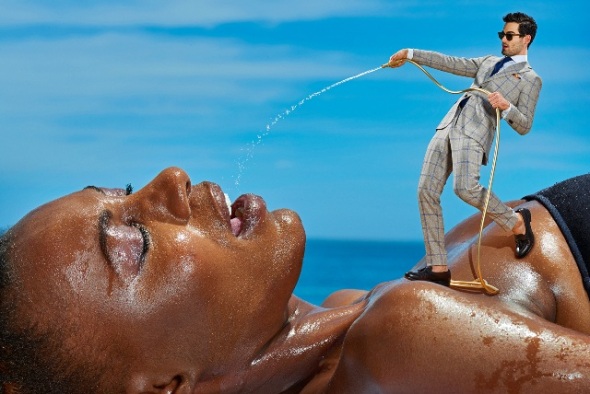 Their press release begins ‘sometimes it seems like it’s a woman’s world these days, and we just live in it’…ummm, on the average men earn over 20% more and in some countries women still don’t have the right to vote, divorce or go to school (the point of the 2016 International Women’s Day theme), but sure, ‘it’s a woman’s world’.

The press release went on to say: ‘So what’s a guy to do? You’re a modern gentleman, but the tables have turned. You have a certain way with the ladies…that is, until they have their way with you. You’re a playboy, but what happens when the playboy becomes the plaything?’

To dievca – it’s a very creative campaign – she loves it.  But, what the press release says: The intention to portray the woman as the dominant and the man as the submissive, doesn’t seem to work.  she thinks the opposite comes across and in her opinion that’s not necessarily a bad thing — Suitsupply just needs to state it correctly. Right?
At least the suits look great–dievca still needs to see if Master would be willing to check them out, especially since he lost weight and needs a new suit.