Lick a block of ice – Beat the Heat 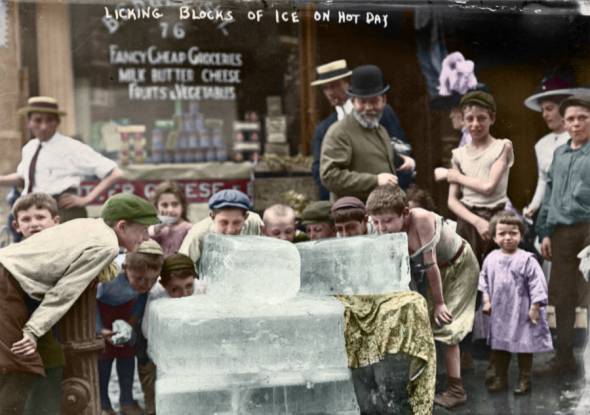 Children lick a massive block of ice to stay cool on a hot day. July 6, 1912.
Library of Congress; Ryan Stennes

What do you do when you don’t have AC?

We got through the July Heatwave, but temperatures and humidity in NYC are still running high:

The humidity is enough to warrant using the AC. But parts of NYC don’t have electrical service and that wasn’t an option in July 1911. All along the East Coast of the United States, temperatures climbed into the 90s and stayed there for days and days, killing 211 people in New York alone.

Though temperatures never quite broke 100 degrees in the first two weeks of July in New York, the city was poorly equipped to handle the heat and the humidity that went with it. Poor ventilation and cramped living spaces exacerbated the problem, ultimately leading to the deaths of old and young alike, with children as small as two weeks old becoming overcome by the heat.

In the peaks of the wave, people abandoned their apartments for the cool grass of New York’s public spaces, napping beneath trees in Central Park or seeking shade in Battery Park.

The streets were anarchic: People reportedly ran mad in the heat (one drunken fool, described by the New York Tribune as “partly crazed by the heat,” attacked a policeman with a meat cleaver), while horses collapsed and were left to rot by the side of the road.

Around July 7, when temperatures returned to ordinary levels of July sweat, the humidity remained high. It was this, reported the New York Times, that was responsible for so many of the casualties, “catching its victims in an exhausted state and killing all of them within the hours between 7 and 10 a.m.” The New York Tribune phrased it still more dramatically: “The monstrous devil that had pressed New York under his burning thumb for five days could not go without one last curse, and when the temperature dropped called humidity to its aid.”

City authorities did what they could to handle the heat, including flushing fire hydrants to cool off streets. At the end of the first week, even a terrific thunderstorm did little to alleviate the discomfort. In New York, the Times reported, it was simply a few showers “accompanied by much thunder, which rumbled as early as 5:45 a.m., giving promise of big things, and then disappeared into the ocean.”

A second thunderstorm, around the 13th, finally brought temperatures back down to manageable levels. As it did so, however, five more people died from lightning strikes.